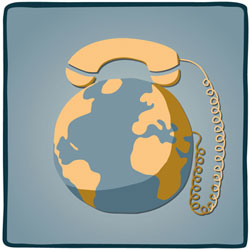 Currently, fewer than half of American households have a landline. Of those that do, a large percentage operate on voice over Internet protocol, or VoIP, which — like cell phones — has no relationship between the price of the call and geographic location. The single clear exception, however, are vanity numbers. When a U.S.-base company — specifically a large company — does business overseas, the addition of a toll-free vanity number can have a clear and direct impact on consumer spending patterns.

Vanity numbers, also called mnemonic numbers, are phone numbers whose keypad letters spell a word or a sound that identifies the business, it's product or service. These numbers, the most famous of which is 1-800-FLOWERS, are designed to not only be easy to remember, but to add an element to branding — sometimes to the extent that the number itself becomes the brand.

As reported by press-distribution firm PRLog, the recall rate of customers for businesses with vanity numbers is more than double that of businesses with traditional numeric numbers. A full 65 percent of customers could remember a vanity number, as opposed to 31 percent who recalled a traditional number. The report states that a vanity number can increase sales by 200 percent and increase advertising efficiency by 300 percent. These numbers were not diminished when tested with international businesses.

Although there are many factors beyond a phone number that dictate an international, U.S.-based company's performance, a clear pattern emerges when looking at the telecommunications industry. When comparing Verizon, AT&T and Nextel, only Verizon made the Fortune 12 list. AT&T made the Fortune 120 and Nextel was limited to the Fortune 200. One obvious difference? Only Verizon retains a vanity number (1-800-PICK-DSL), whereas its competitors relied on traditional numerical toll-free numbers.

A universal international freephone number, or UIFN, assigns an extra digit to a toll-free number. This 11-digit fixed format allows the modified number to remain otherwise unchanged throughout the entire world. 1-800-FLOWERS would become +8000-FLOWERS, allowing the business to retain its unique and branded vanity number while allowing its call center to be accessed from anywhere in the world. Travis May, CEO of TollFreeForwarding, mentions that “with this simple variation, businesses can significantly extend their reach while remaining brand integrity in their telecommunications initiatives. This results in almost effortless international customer engagement.”

It is important to remember to sign up with a provider that offers sequential dialing. This service — which should be free — pushes a call made on a busy line to up to four different numbers, meaning that if the first number is busy, it will automatically forward the call to the second, third and so on. No matter where in the world the call is placed, customers who encounter a busy signal are much less likely to call back than those who at least reach an automated answering service.

Although Europe does not yet share America's zeal for vanity numbers, recent research clearly shows that the combination of a UIFN and a vanity number working in concert has clear benefits to global companies that are based in the U.S. The primary distinction turns on language considerations: effective deployment of vanity numbers must center upon company names rather than product or service phrasing. Where names can be easily translated across national and linguistic barriers, phrases often are not.

Independent consultant Amanda Morrison reports that her research indicates a direct correlation between having an international toll-free number and customer loyalty. Not only can a U.S.-based global business draw new customers with a toll-free number, but can use it to retain all-important repeat customers as well.

The rise of mobile devices and smartphones has muddled the once clear waters of toll-free calling. As businesses large and small debate the necessity of having an 800 number, one pattern becomes clear. For business that are based in the U.S., but do business overseas, vanity toll-free numbers — specifically when used in combination with universal international freephone numbers — show a clear and identifiable correlation with improved marketing, increased leads, remarkably better brand retention and higher customer spending. As the end of the landline era appears to close the book on the traditional toll-free system, there is still room for vanity numbers in foreign business.