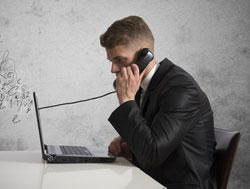 Most CTOs know that voice-over Internet protocol, or VoIP, is a web-based alternative to traditional analog telephone systems, which can provide a cost-effective, customizable, modern replacement for standard voice communication. But the idea that VoIP can be built on the back of both SIP trunking and hosted PBX is still a concept that eludes many business professionals — and for good reason. The technologies are similar, serve similar functions and produce similar results. The nuanced differences, however, will play a major role in a business's decision to build their VoIP system on one technology or the other, so understanding the difference between SIP trunking and hosted PBX is paramount.

Private branch exchange, or PBX, was originally developed so companies could save money on internal phone calls by switching the circuits themselves locally at a time when operators ran switchboards by hand. Although data networks and packet switching have replaced manual systems, and the Internet has taken over as the primary delivery system, the familiar acronym is still used to describe a wide range of private, in-house telephony operations, even if they aren't private branches and nothing is being exchanged.

Hosted PBX works from the same premise of handling internal calls locally, but by hiring a third-party host to run the system, the responsibility of owning, operating, securing and maintaining the necessary hardware — which is expensive and complicated — is removed from the business.

PBX offers the entire range of modern VoIP services, including, but not limited to, voicemail, conference calling, touchtone menus, automated greetings, call records, call waiting and call forwarding. Also, more than one person can be reached through a single number, and PBX routes, holds and transfers calls. Since the system is hosted by an independent firm that owns and maintains the hardware, there is very little startup cost. Also, when the host upgrades its system, those upgrades are passed on to the client at no charge.

Unlike PBX, Session initiation protocol, or SIP trunking, was invented at the dawn of the mainstreaming of the Internet in 1996. The primary difference between SIP trunking and PBX hosting is that SIP allows several forms of media (audio and video, for example) to be channeled through the same line by replacing the traditional trunk with the Internet.

SIP provides everything that comes with PBX, but it improves on its efficiency and quality through a complex system that removes primary and basic-rate interfaces. Users can communicate with both mobile and fixed callers from essentially anywhere, and cost efficiency is improved by consolidating audio and video into a single line.

When choosing to build your communications on a hosted PBX or SIP trunking system, the primary deciding factor will be the size of your business. Essentially, small businesses are almost always better off with hosted PBX. Larger operations with more than 20 employees will be able to benefit from the increased flexibility and security provided by SIP trunking. Larger businesses are also better equipped to absorb initial start-up costs.

A solid, reliable and modern VoIP network can be built on the foundation of either hosted PBX or SIP trunking. The main differences are initial costs, hardware requirements and the level of the business's level of IT sophistication. In reality, once the VoIP system is in place, the overwhelming majority of the people who use it on a daily basis will never know the difference.