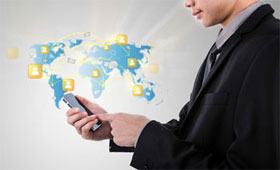 As businesses move to bring their phone services into the modern era, the Voice over Internet Protocol, or VoIP, industry has taken off. According to a 2013 study by market research firm IBISWorld, VoIP has sustained annual growth since 2007 at a rate of 16.7 percent, giving the industry a $15 billion slice of the pie. The traditional provider, the familiar Public Switched Telephone Network (PSTN), is struggling to keep pace, with potential hybrid models currently operationalized in different ways.

A Brief History of Telephony

As one IT writer put it, "The history of the Public Switched Telephone Network is a history of monopoly, regulation, anti-trust, deregulation, patents and right-of-way issues." Although it's true that corporate and governmental wrangling dominated much of the network's evolution, the story of PSTN is really the story of the two biggest names in the history of virtual communication: American Bell and AT&T.

Alexander Graham Bell formed American Bell ten years after the end of the Civil War. Nine years later, in 1884, American Bell incorporated AT&T as a subsidiary. Later that year, the first long-distance phone call was made between Boston and New York. The era of modern communication had begun. What followed was an extraordinary century of buyouts, mergers, lawsuits and — most importantly — call switching, which gave individuals control over their own phone lines.

In 1996, President Bill Clinton signed the Telecommunications Act, which deregulated the industry and allowed the Internet to be included in broadcasting and spectrum allotment.  The act's controversial Title 3 allowed cross-media ownership — which laid the groundwork for the VoIP revolution of the coming years. By then, PSTN had been firmly ensconced for a century.

As defined by the FCC, VoIP is a system that allows calls to be made over a broadband Internet connection — as opposed to over an analog phone line — by converting the user's voice into a digital signal that travels over the Internet before being converted back to a regular telephone signal. It is often referred to as "Internet phone" or "online calling". Although rudimentary versions of the technology existed before, companies such as Skype made the process familiar not just to businesses, but the general public, starting around 2004.

The Argument for VoIP

Voice over IP is wildly popular with both individuals and businesses for good reason. It requires less than one-sixth the bandwidth to transmit (10 kbps one way for voIP vs 64 kbps for phones). Upgrades are done through simple software rather than through purchasing and installing expensive and complicated hardware or phone lines and most VoIP providers offer extra services like call waiting and call forwarding for free. The biggest and most obvious incentive, however, is cost. VoIP to VoIP calling is free, and fees for calling landlines or mobiles are nominal and charged by the minute. Standard lines come with expensive contracts to be paid monthly, often with roaming or long-distance charges and international rates that vary by company and country.

The Argument for Staying with PSTN

VoIP, however, is not yet absolute. For businesses, one issue remains crucial: connectivity. By the nature of how VoIP providers connect — converting analog waves or vibrations into digital "packets" — VoIP is susceptible to connectivity issues. For enterprise businesses, this is, of course, unacceptable. Corrupted or missing packets, bandwidth limitations, or digital compression used to limit bandwidth, can all result in echoes, delays, choppy or stuttered reception and even dropped calls. Advocates of PSTN refer to it as the "good old landline" for a reason.

Whether you should move to VOIP or stay with your existing PSTN system, stay informed of technological advancements so that when the time is right, your company can benefit from and improved unified communications system.