Voice over Internet protocol — or VoIP — telephony has skyrocketed in popularity among businesses since it gained mainstream acceptance in the early 2000s, and for good reason. Internet-based phone systems are far more customizable than traditional networks. They require significantly less investment in hardware and infrastructure, they update automatically through software, they can unify communications by providing messaging, voice, video and chat in one platform and, perhaps most significantly, VoIP is almost always less expensive. VoIP systems, however, must be built on the back of a separate foundation. Depending on the business, that foundation comes in one of two similar, yet unique options: SIP trunking or hosted PBX.

Private branch exchange, or PBX, was originally developed by private companies looking to save money on internal calling by switching the circuits themselves locally at a time when human operators still ran switchboards manually. This removed the need for a third-party provider to route internal calls, but it required businesses to finance, build and maintain the internal network themselves.

Now, data networks and packet switching have replaced manual systems, and the Internet has taken over as the primary delivery system. More importantly, even smaller businesses can now maintain a private internal calling system by farming out the infrastructure and hardware requirements to a PBX host. Hosted PBX follows the same idea of handling internal calls locally, but by hiring a third-party host to run the system. With hosted PBX, the responsibility of owning, operating, securing and maintaining the necessary hardware — which is expensive and complicated — is removed from the business, allowing its personnel to focus on their core competency. 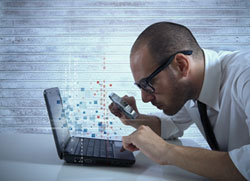 PBX gives businesses the full menu of modern VoIP services, including, but not limited to, call forwarding, voicemail, call recording, touchtone menus, conference calling, automated greetings and call waiting. Also, more than one person can be reached through a single number, and PBX directs, holds and transfers calls. Since the system is hosted by an independent firm that owns and maintains the hardware, there are minimal startup costs. Also, when the host upgrades its system, those upgrades are passed on to the client business at no extra charge.

Unlike the long, storied history of PBX, Session initiation protocol, or SIP trunking, is a much more recent invention. Developed at the dawn of the of Internet's public arrival in 1996, SIP modernized the PBX concept. The crucial difference between SIP trunking and PBX hosting is that SIP allows several forms of media (audio and video, for example) to be channeled through the same line by replacing the traditional trunk with the Internet.

SIP offers everything that comes with PBX, but it improves efficiency and quality through a complicated system that removes primary and basic-rate interfaces. Users can communicate with both mobile and fixed callers from essentially anywhere, and cost efficiency is improved by consolidating audio and video into a single line.

When businesses are deciding whether to build their telephony network on a hosted PBX or SIP trunking system, the primary deciding factor should be the size of the business. Basically, small businesses are almost always better off with hosted PBX. Larger operations with more than 20 employees will be able to benefit from the increased flexibility and security provided by SIP trunking. Larger businesses are also better equipped to absorb initial start-up costs.

Both hosted PBX and SIP trunking can be the foundation of a modern, reliable VoIP network. The main differences are initial costs, hardware requirements and the business's level of IT sophistication. The reality is that once the VoIP system is in place, Virtually anyone who uses it on a regular basis will never know the difference.